Förster resonance energy transfer (FRET) describes a physical phenomenon of non-radiative energy transfer based on dipole-dipole coupling that can occur from an excited state fluorophore (the donor) to a ground state fluorophore (the acceptor) (Figure 1). FRET is detected by the appearance of sensitized fluorescence in the acceptor and by a decrease (quenching) of donor fluorescence.

Figure 1: FRET is based on the transfer of energy (not fluorescence!) between two suitable fluorophores, a donor and an acceptor. Excitation of the donor by a light source triggers a non-radiative energy transfer (FRET) towards the acceptor, which in turn emits sensitized fluorescence at a given wavelength.

FRET only occurs when the donor fluorescence emission spectrum overlaps with the acceptor excitation spectrum, when donor-acceptor relative dipole orientations are approximately parallel, and when the donor and acceptor are within close proximity (typically 1-10 nm). The latter has led to the widespread application of FRET in biomedical research for the study of molecular interactions, as well as the measurement of distances on a molecular scale.

Since the transfer of energy occurs only when the donor and acceptor are in close enough proximity, FRET based assays are homogeneous. That is, they do not require any washing or separation steps to remove distant donor and acceptor partners. However, the performance of traditional FRET assays using conventional fluorophores is often compromised by the susceptibility of conventional fluorophores to photobleaching, and by scattered light and high background fluorescence from sample components (e.g., cell debris, buffers, test compounds and microplates). This makes FRET signal-to-background (S/B) levels unsatisfactory for many applications.

Time-Resolved FRET (or TR-FRET) is a well-established technology widely used in drug discovery and clinical diagnostics, and increasingly used in academic laboratories. TR-FRET has turned out to be a highly versatile assay technology, allowing the study of a wide range of biological interactions ranging from low to high affinity, using both small and large molecules. 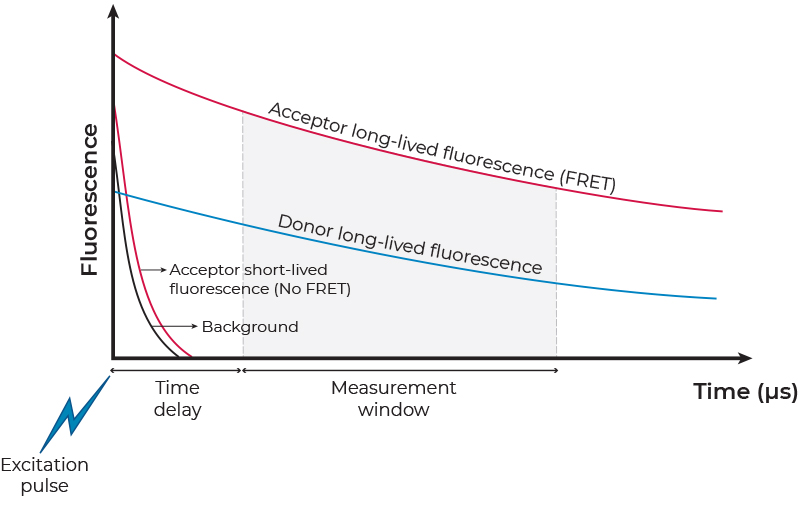 Figure 2: In contrast to standard FRET assays, THUNDER™ TR-FRET assays use a long-lifetime Europium chelate as the donor fluorophore. The specific FRET signal can thus be measured in a time-resolved manner, after a suitable time delay (typically 50 to 100 µs). This virtually eliminates all fluorescent background caused by the sample and plastic microplate, and by direct excitation of the acceptor. As a result, the THUNDER TR-FRET assays exhibit very low background and high S/B ratios.

TR FRET exploits the unique photophysical properties of lanthanide labels when used as FRET donors (Figure 2). Lanthanide labels have exceptionally long excited state lifetimes ranging from hundreds of microseconds to a few milliseconds. This is in sharp contrast to the very short fluorescent lifetime, on the low nanosecond range, of both conventional fluorophores used in standard FRET assays and natural background fluorescence. The long fluorescence decay after excitation allows time-resolved or gated FRET signal detection, after all interfering short-lived signals have decayed to negligible levels. The time-resolved detection also avoids interference from the acceptor emission due to its direct excitation (i.e., non-sensitized emission), rather than by FRET. In addition, lanthanide labels exhibit a large Stokes shift (the difference between the excitation and emission maxima) that minimizes crosstalk. Overall, because of their excellent temporal and spectral resolution, TR-FRET assays exhibit very low background and high S/B ratios, two features critical for the development of reproducible and robust assays. Of note, many microplate readers supporting TR-FRET measurements are available (see a list of TR-FRET compatible readers here).

The THUNDERTM TR-FRET assay platform is based on the use of a carefully selected pair of donor-acceptor fluorophores showing exceptional spectral compatibility and TR-FRET signal. THUNDER assays use a long-lifetime and highly stable Europium chelate (Eu) as the donor fluorophore and a small, unique far-red fluorophore (FR) as the acceptor. In a sandwich immunoassay application, one antibody is labeled with the Eu chelate and the second antibody is labeled with the FR fluorophore. The specific binding of the two labeled antibodies to distinct epitopes on the target protein takes place in solution and brings the two fluorophores into close proximity. Excitation of the donor Eu with a flash lamp (320 or 340 nm) or a laser (337 nm) triggers a FRET to the acceptor FR, which in turn emits a specific TR-FRET signal at 665 nm. Residual (non-transferred) energy from the Eu generates light at 615 nm. These long-lived fluorescent signals are read in a time-resolved manner to minimize assay interference, which increases assay performance (Figure 3). In addition, the concentrations of fluorophore-labeled antibodies in all THUNDER assay kits have been carefully optimized to further minimize assay background and maximize the S/B ratio. Of note, the high resistance of the Eu chelate to photobleaching and very long signal stability allows the reading of assays as many times as needed, including the archiving of samples.

Figure 3: The binding of Eu-labeled and FR-labeled antibodies to the target protein in the cell lysate brings donor and acceptor molecules into close proximity. Upon excitation of the Europium chelate at 320 or 340 nm, energy is transferred to the far-red acceptor fluorophore, which in turn emits light at 665 nm. The intensity of light emission at 665 nm is proportional to the level of protein.

Another key advantage of TR-FRET is that data can be expressed and analyzed as either the emission signal at 665 nm or the 665 nm/615 nm emission signals ratio. The use of the ratiometric measurement further increases data reproducibility because it normalizes small pipetting errors and also corrects for some compound artifacts. Indeed, some test compounds may quench the donor Eu signal at 615 nm either by absorbing the excitation light at the UV wavelength used to excite the donor (“inner filter effect”), by absorbing the donor emission at 615 nm or by light scattering (e.g., poorly soluble compounds). Because such situations can cause a decrease in the intensity of both the donor and acceptor emission signals, the 665 nm/615 nm ratio corrects for these interferences. 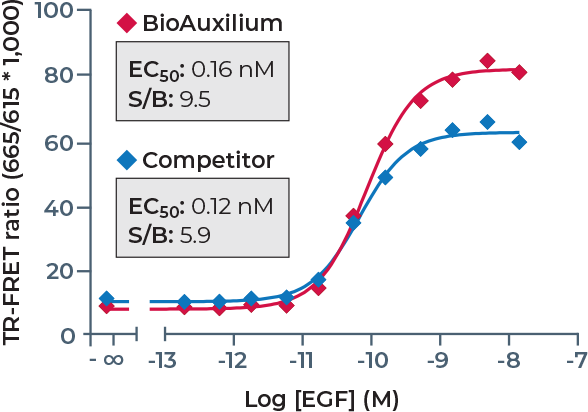